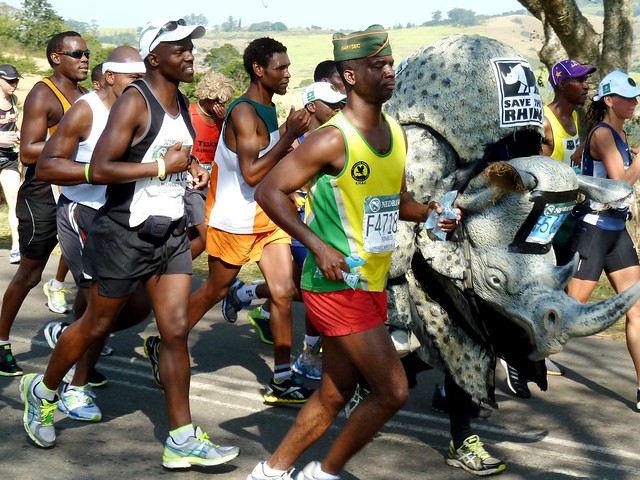 KwaZulu-Natal is welcoming thousands of visitors, including hundreds from abroad for the Comrades Marathon on Sunday, 9 June. And some hospitality businesses with strong Umhlanga ties have been quick off the mark to cash in.

The ultra-marathon, with its 22 000 runners and legions of supporters, was expected to boost the provincial economy by up to R700 million, according to the Comrades Marathon Association.

Some of that money was expected to flow north of the Umgeni River, particularly to accommodation providers.

Tsogo Sun, an official partner of the event, offered early bird specials for those who booked at its Durban hotels from 7 to 9 June, including its Garden Court uMhlanga and Beverly Hills.

The packages, from R1 395 a day for couples, included an “early power breakfast and glucose station from 3am on race day”.

The team at the Oyster Box Hotel, a mere “20-minute drive” from the start at the Durban City Hall, have also been no slouches in the marketing race stakes.

They posted a blog in May featured an interview with Bruce Fordyce, the Comrades’, most famous runner.

Fordyce, who has completed 30 Comrades Marathons, including nine firsts and, incredibly, a narrow miss on a Silver attempt in 2011, told an Oyster Box interviewer he might be tempted to run again in 2021, when the race celebrates its centenary.

He also shared some race memories and personal highlights, like how he bumped into the legendary Zola Budd in his last race, in 2012, and crossed the finish line with her.

Fordyce also talked about Parkrun, the 5km runs that take place every Saturday around the world, and how he introduced the phenomena to South Africa.

The Oyster Box article signs off  by suggesting running fans cheer on the Comrades or take part in an Umhlanga Parkrun while staying at the hotel.

Umhlali-based Resolute Travel, which specialises in sports tourism, was offering runners a package which included airport and race-related transfers plus accommodation at the Holiday Inn Express, in Gateway, Umhlanga.

Many B&Bs in Durban North and Glen Ashley were capitalising on their central location, between the airport and the race start-point, as well as the Comrades expo, at the Durban Exhibition Centre.

The proximity point was one that cropped up frequently on online accommodation review and booking sites.

A certain “Paul” from the United Kingdom, for example, had the following to say on Booking.com about Umhlanaga Rock’s Flamingo Lodge: “I’m an overseas Comrades Green Number runner with a decade of experience visiting the greater Durban area and this is the perfect base for organising a run, hanging out at the beach or visiting Umhlanga’s restaurants.”

However, while many establishments make mention of their convenience to Comrades runners on their websites, fewer offer special enticements over the busy weekend.

Comrades-flavoured marketing material on some websites was sometimes dated or did not go beyond offering a potted history of the race, unashamedly borrowed from Wikipedia.

They may be missing a trick.

Last year, the race attracted more than 500 athletes from the rest of Africa and close to 400 from further afield.

Tourism KZN said in a statement this week that it had been working with the Comrades Marathon Association to grow this number.

The acting chief executive of Tourism KZN, Phindile Makwakwa, said: “We believe that this marathon can stand head and shoulders with the likes of the New York Marathon, the London Marathon and Gold Coast Marathon in Australia. It is for this reason that we are supporting the association with promoting this marathon at international platforms.”

A study by Tourism KZN during previous marathons found the province was recommended as a tourist destination for reasons that include its attractions, beaches and diverse culture.

“Visitors also cited KZN as a favorite family destination, a beautiful province with friendly people and good weather. We have lots to offer including many sporting events,” said Makwakwa.

Nomusa Dube-Ncube, the new MEC for Economic Development, Tourism and Environmental Affairs, is enthusiastic about the 90km race, which will be run for the 94th time this year.

She sees it as an opportunity to showcase the beauty of the province and its facilities.

“The race is going from strength to strength with more international athletes competing this year compared to 2017 and we hope they will not only enjoy the race, but take time to explore our many sites and wonders – from the beach to the Berg,” Ncube said.