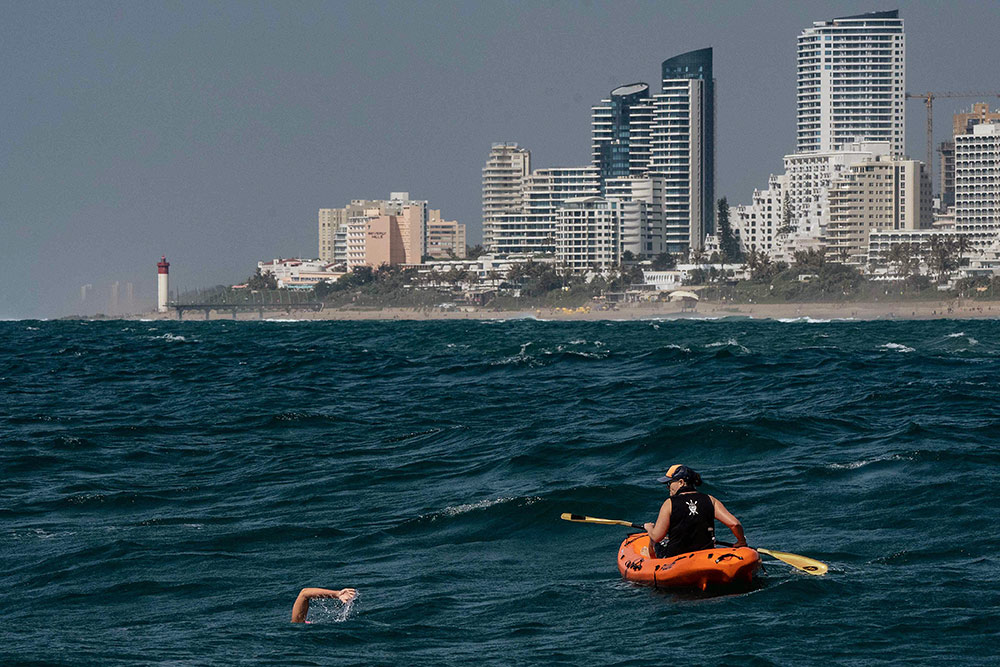 A record-breaking endurance swimmer shrugged off “wild” conditions, illness and a nasty bluebottle sting, to complete a 101km campaign on the KZN North Coast in aid of plastic-free oceans.

Sarah Ferguson tackled the multi-stage swim in concert with hikers who were doing the newly launched Philocaly Trail, a charity beach walk and cleanup from Durban to Mtunzini over seven days.

Philocaly is ancient Greek for “love of beauty” and the trail was about appreciating the coastline and raising funds and public awareness about the need to conserve it.

Ferguson, who in March became the first person to swim around Easter Island in the Pacific, mixed things up a bit during the trail, from 12 to 18 October.

“Insane winds” forced changes to the order in which she swam the stages and some reversal of daily start and finish points.

And the 37-year-old had to take to her bed after developing a head cold and sore throat on what should have been her second day, from Umdloti to Ballito.

“When I woke up on day two my resting heart rate was pretty high for me… my doctor she said to rest. I am usually stubborn and push through but knowing I had five more days of big swimming ahead. And looking at my long-term career decided it was not worth the risk of damaging my heart,” Ferguson told Umhlanga Tourism.

But with her heart rate back to normal the following day, the Durban North resident resumed the swim at, Christmas Bay, at Sheffield Beach.

She returned at the end of the event, on 18 October, to complete the stage she had skipped, but swam it north-south, from Ballito to Umdloti.

Over the course of 140km and seven days, a total of 280 hikers took part, collecting pollution on the beach and raising more than R60 000 for the three non-profits, said the organiser, Nikki Williamson.

The first stage of the trail was to Umdloti. But with a north-easter blowing, Ferguson opted to head in the opposite direction to the hikers, completing a 20.5 kilometre downwind swim in 3 hours and 45 minutes.

Ferguson said: “Swimming past Umhlanga was fun and as I swim there quite often on the weekends it was a familiar section to swim past. We had really fast conditions and it took me just 90 minutes to get there from Umdloti.”

The ultra-distance swimmer and her support crew were visited by a couple of dolphins as they headed south and what may have been a juvenile hammerhead shark – “which was fun” – near the mouth of Durban’s Umgeni River.

“There were a few tough moments out there with massive swell and the odd breaking wave,” she said at the end of day one.

In the water with Ferguson at all times was a kayaker and, from day four, a safety swimmer, looking out for danger.

Shadowing them on a dive boat was the rest of the crew, including on different days a second safety swimmer, navigator, photographer-videographer, photographer, chef-massage therapist, driver-motivator, boat skipper, shark guru and a journalist.

They crew had a torrid time of it, including a spill while launching in big seas at Blythedale, on day four.

“We had two relatively calm days the entire swim, but it was pretty rough out there and added a lot of mental challenges for me as well as interesting rides for my team,” said Ferguson

But she paid tribute to her “incredible and stoic” team and said they never complained.

“Conditions were pretty wild… I have never been in such insane winds as I had on day four of the swim, from Sheffield Beach to Zinkwazi.

“It was insane and such fun, with wind speeds up to 48 knots and big swell made it incredibly challenging for my kayaker to hold back and control the double kayak,” said Ferguson.

Then there was the bluebottle sting, about halfway through day four.

“I had to stop and take an antihistamine due to it starting to get into my glands. My arm went a bit numb and I lost some power for about 45 minutes. It was a strange sensation for me but luckily didn’t progress to anything more serious.

“My shark spotter (Jess Escobar) had also got stung earlier with a similar reaction, so it was obviously a particularly strong venom,” she said.

On day six the crew had to man up again.

With a strong north-easter blowing, they opted to again switch directions.
But there were further complications.

The sea was dirty – no good for the crew who needed to keep a look out for sharks.

“We had to launch through the river mouth at Mtunzini. We then went 25km out to sea to find clean enough water to swim in for good visibility,” said Ferguson.

In the deep blue, beyond sight of land, Ferguson did a fast 20km downwind swim. She ended roughly in line with the Hatchery, remarking on seeing only one turtle and two jellyfish.

“The ride back to shore was terribly bumpy, wet and somewhat terrifying. Surfing waves in a dive boat was a novel experience. I also got mild whiplash from a few knocks in the boat. We were soaked and salty and relieved to make it onto dry land,” she said.

Asked about sea-life they had come across over the six days, Ferguson said it had been disappointing.

“In over 100km of swimming I saw very little… Last year I swam 100km in Sodwana and Mozambique and we had an abundance of marine life along the way.

“This year I saw only two small sharks and two pods of dolphins came near us, but were not interested in hanging out. The whales were incredibly shy and did not hang around. This is very disappointing and potentially a cause for alarm,” said Ferguson.

She said the KZN coast with its many reefs should be teeming with life and felt the apparent absence of this may be the result of overfishing, climate change and pollution.

“Our marine life and reefs are taking strain. We expected to see a whole lot more life than we did,” she said.

Ferguson swam for the South African national team before quitting the pool to pursue a career as a physiotherapist and Pilates coach.

In 2012 she established Breathe Ocean Conservation to raise public awareness of marine pollution and to campaign against single-use plastic.

Two years later  she did her first long-distance sea swims, becoming the first woman to complete the 17.9km from Umhlanga to Durban, in a time of 4:16.

During her Philocaly swim, Ferguson said she personally picked up only three pieces of plastic,  but put this down to the rough seas.

“The conditions were pretty wild most of the time so I did not see much at all, but the beaches are full of plastic all up the coast. The plastic is sadly everywhere and I cannot pin-point which areas are worse off,” she said.

Apart from its famed monumental statues, Easter Island is near the South Pacific Garbage Patch, a vast region infamous for its marine debris and plastic particle pollution.

Ferguson said she was heartened by the “fantastic” public support she received during the Philocaly swim.

Breathe Conservation focused on education and would use some of the money raised from the Philocaly Trail to assist the Wildlife and Environment Society of South Africa, including with sign boards for Blue Flag beaches.

“I am also researching an eco-school in Bali to try to implement something similar here in South Africa,” said Ferguson.

She was gearing herself up for another big swim, but this was still to be confirmed.

“It needs to be inspired and I don’t like to rush into anything. We are looking at a swim in the Transkei and possibly another staged swim up the coast with the Philocaly trail but nothing concrete yet.”