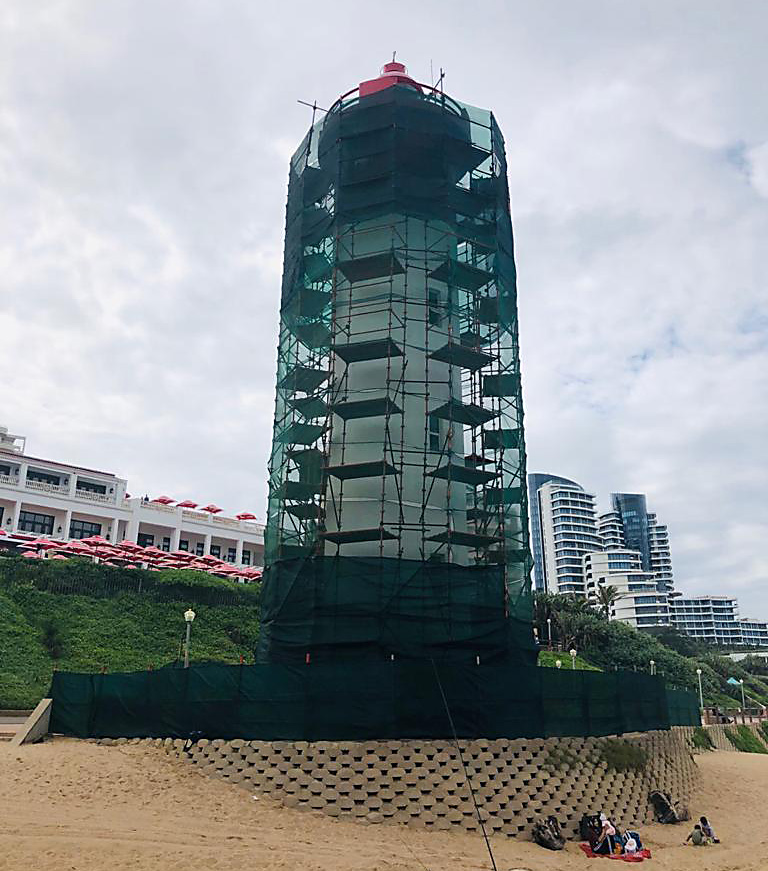 It looms large on the promenade and it’s at the heart of the local tourism association’s logo, so it’s pleasing that the Umhlanga Rocks Lighthouse is getting a lick of paint. Or to be more precise, an estimated 395 litres of the stuff. The interior, exterior and lantern house are being repainted at a cost of R1.1 million by Umkhonto Electrical and General Contractors CC.

The work is part of scheduled maintenance carried out every five years.

The  project started on 3 February 2020, but the authorities could not give a finish date as weather could slow progress.

It was last painted in 2015, according to Lighthouse and Navigational Systems, part of Transnet National Ports Authority.

“The Umhlanga Rocks Lighthouse is constantly exposed to the elements – including heat, humidity, wind, rain, and salt spray and air. And the paints used for the interior and exterior… need to be able to withstand the very challenging conditions,” said David Gordon, executive manager: Lighthouse and Navigational Systems.

Gordon said the port authority was mindful of the environment and required the contractor to comply with the National Environment Management Act and other laws.

And a stringent business it was too.

“As an example, the appointed contractor must ensure paint chips and waste arising out of the blasting or scraping must be contained and bagged daily,” said Gordon.

Umhlanga regulars will know that  the cylindrical concrete tower is painted white, with a red top and red lantern house.

“The daymark, or appearance of the Umhlanga Rocks Lighthouse, will remain as is,” said Gordon.

They are changed only very occasionally as the needs of shipping changes or when new lighthouses are built or removed.

But this is clearly not something to be contemplated lightly, if you would pardon the pun.

The Umhlanga Lighthouse is one of 45 active lighthouses along the coast of South Africa. All are managed by Lighthouse and Navigational Systems.

The construction of its concrete tower began soon after the opening of the Cooper Lighthouse, on Durban’s Bluff, on 31 July 1953.

Builders completed the lighthouse in four days and nineteen hours, at a cost of R23 838.

However, the Umhlanga Rocks Lighthouse was commissioned a year later, on 25 October 1954. The authorities decided to include a subsidiary red sector light, which had to be imported from England, delaying work.

This light, which is mounted below the main revolving light, displays a 30 degree-arc demarcating the prohibited anchorage area.

The main light flashes three times every 20 seconds at an intensity of 600 000 candelas.

Candelas are a  measurement of light intensity. One candela, roughly speaking, is equivalent to the light of one common wax candle.

The Oyster Box Hotel, the lighthouse’s closest neighbour, has an, er, enlightening blog on the subject too.