April 6, 2020 | Umhlanga Tourism | Comments Off on Bench-marking the Japanese Gardens 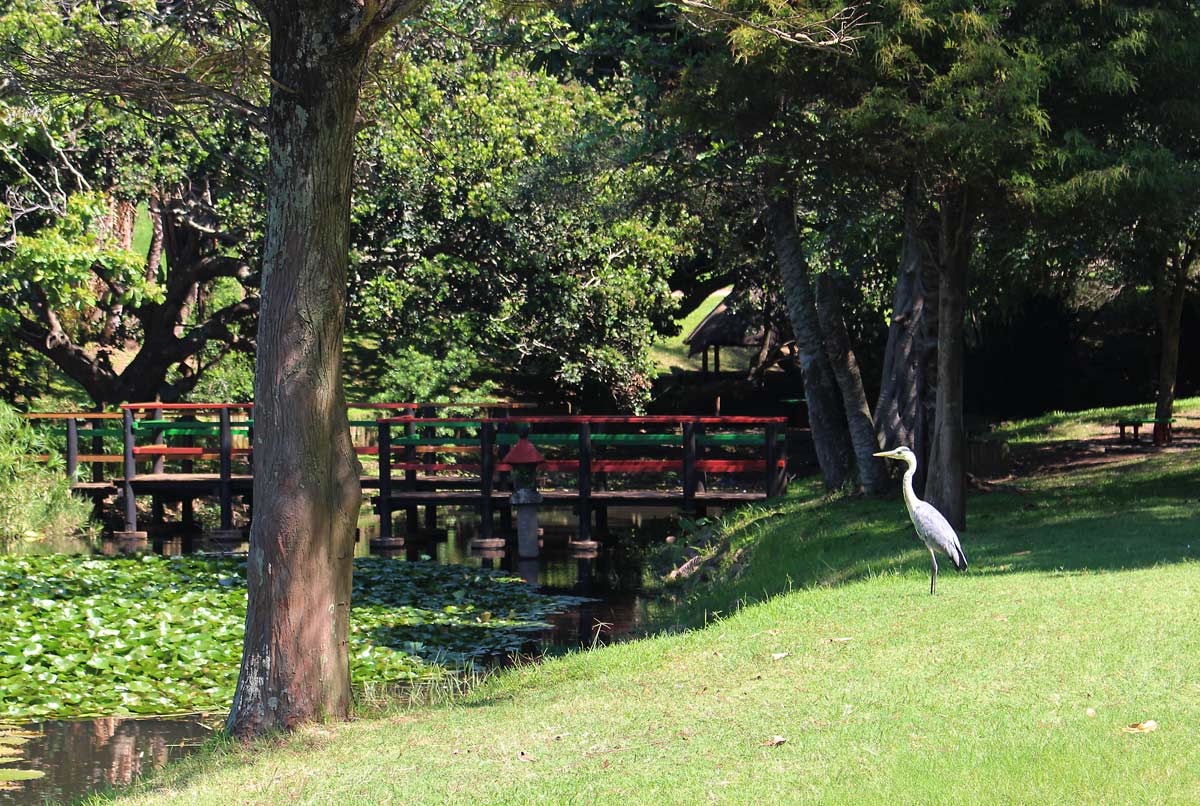 In the previous blog, on the eve of lockdown, the Durban North Japanese Gardens was proving to be an agreeable place for picnicking.

A number of polished concrete tables and benches have recently been installed in the Durban North park. And your correspondent found one near a pond and was sitting, eating sushi and counting his blessings…

And very pleasant it was too in the shade, looking out over the water at the wooden bridge, with its contrasting red and green railings. The productivity experts will tell you about the importance of downtime.

Some will go so far as to advise that boredom is necessary to spark creativity.

Einstein may have had this in mind when he took a job at the Swiss patent office around the time he was working on his Theory of Relativity.

By rights, I should have been awash with good ideas.

At the very least, some sort of scheme on how to turn idle hours into profitable column inches should have percolated to me through the ether.

But it was no good; I couldn’t sit still.

I blame the garden furniture people.

Its makers had put all ornament to rout.

The furniture was positively shot through with simplicity and purity.

It was impressive as a piece of sculpture.

But, blixem, why did those designer Johnnies have to be so blerrie austere, so merciless on the posterior?

I quit the less-is-more bench and wandered down to the water’s edge.

Above me on the bridge, a young couple, Sihle Maphumulo and Miso Mcobongwane, were enjoying an outing, snapping selfies.

Maphumulo told me he was from Westville as he spelt out his companion’s name,  M-c-o-b-o-n-g-w-a-n-e.

“She is from the Eastern Cape,” he explained.

I left them after a bit, skirting the pond to its west. Here foliage, including a yellowwood tree, framed the view. The tree’s pointed leaves and slender branches somehow added an oriental flavour.

On the other side of the pond I tried my hand at photographing a cycad and a dense stand of what I have since learned was traveller’s palm (Ravenala madagascariensis).

It is, in fact, not a palm at all, but a monocotyledonous flowering plant from Madagascar related to South Africa’s strelitzia family.

“The fan of leaves is said to orient itself approximately north-south,” according to a learned work.

The plant was bang on. Sat-nav begone!

I also took a picture of a little ornamental cast concrete Japanese lantern, one of a number in the gardens. It was listing to port, on marshy ground near the pond.

Waterbirds – ducks, geese and storks – refused to be captured on digital film.

Annoyingly, they would stalk off when approached, or take flight in spectacular fashion whenever the camera was switched off.

An athletic young woman hove into view about then.

She was wearing a vest, cycling shorts and trail running shoes.

Tattooed onto her back was an American Indian dreamcatcher.

She seemed to be conducting a cellphone conversation, holding her phone at chin level in front of her with one hand.

In her other hand, she led a sausage dog on a leash.

“Sausage dogs, they say they are intelligent. Are they?” I asked her lamely, by way of an opening gambit when our paths crossed again, later.

Matilda ( I learnt the dog was called) had made a number of enthusiastic, but fruitless, efforts at capturing the waterbirds, straining at her leash.

It was a bit like the proverbial dog that chases the bus, but wouldn’t know what to do if ever it caught it.

Till death do us part

I followed the little valley that cuts across the gardens, west-east, passing black-and-red arches fashioned from gum poles; a small arched bridge; more lanterns; and a few cycad.

I came upon a large paved area was towards the garden’s eastern extremity.

It was built during renovations to the gardens, completed last year.

It’s for wedding parties and there’s also a new gate, opening onto Waterkant Road, below the gardens, to improve access.

Leaving the paved area and heading uphill a little, on the southern side of the valley, I reached an outdoor chapel.

It descends in dramatic fashion to a new gazebo, which in shape and materials echoed the bench at the pond.

Here, under the hard, rectilinear concrete, newlyweds get to say their vows.

For better or worse…

They face, presumably, the presiding officer at his minimalist concrete lectern, part of the same gazebo installation.

And while this is going on, guests sit in the little paved area immediately in front of the gazebo.

If it’s a big wedding, they might find space among the trees on the hill.

It would give them a fine view of proceedings, taking in the gazebo and looking over the highway, across to the sea, to a life together… to eternity beyond.

PLEASE NOTE: This blog on the Durban North Japanese Gardens was written during lockdown with limited resources. Some of the details, including the names of plants captioned may not be accurate. Please send any corrections to matthewhattinghDBN@gmail.com.

Posted in Culture, Umhlanga General, Umhlanga Rocks - Things to do