A pash for the promenade:
It’s been like starting over again

May 11, 2020 | Umhlanga Tourism | Comments Off on A pash for the promenade:
It’s been like starting over again 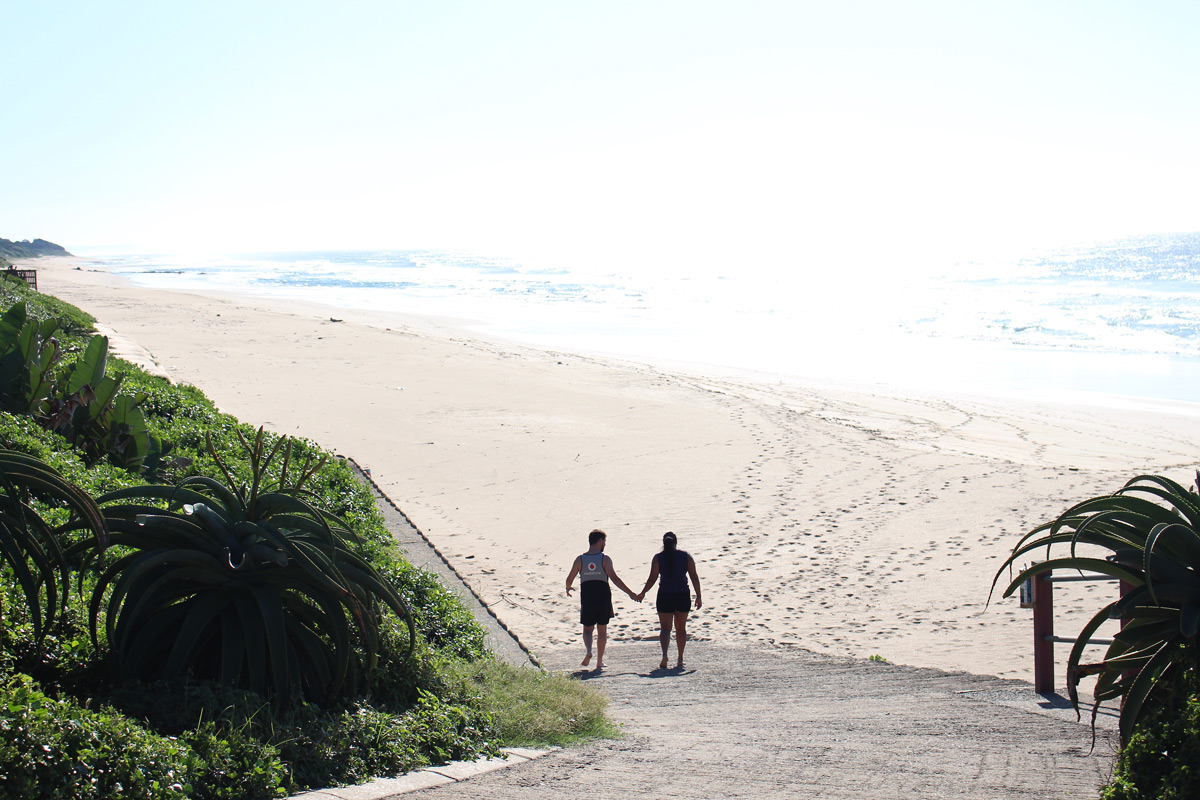 Sometimes you have to lose something – if only for a while – to realise just how much it means to you it. Certainly that’s been the case for FunShine Coast residents, cooped up in their homes for five weeks. The modest easing of Coronavirus lockdown restrictions which now lets them out for a few hours exercise in the morning, has rekindled a passion for the Umhlanga Rocks promenade.

And like so many contrite lovers, they were determined to mend their ways, to make the most of things this time around.

Welcome back, all is forgiven!

Dog-walkers by the score, families, retired folk, the young and the restless, all were at the seaside sidewalk and in numbers, when your correspondent joined them on Wednesday.

Allowing for social distancing and mandatory face masks, they appeared to be having a decidedly sociable time of it, meeting and greeting. And that’s as it should be.

It’s possible to join the Ken O’Connor Promenade (as it’s properly known – named for a former mayor and hotelier) at any number of points and make your walk as long or as short as time or inclination allows.

The Umhlanga parkrun uses it for their Saturday morning timed runs, doubling back on themselves to make up the necessary 5 kilometres.

Top parkrunners manage the distance in a little over 16 minutes, but there’s really no need to rush.

We started near the lighthouse for no particular reason except it was convenient.

The lighthouse is partly covered in scaffolding and netting cloth while its R1.1 million repaint is on hold because of the lockdown.

But the top of the lighthouse remains unshrouded, presumably so it can carry on warning ships off Umhlanga’s rocks.

With only a little stretch of the imagination it might be one of those giant environmental artworks like the wrapped Reichstag in Berlin.

All that was needed was a few hundred metres of fabric, planning permission and funding. Perhaps the municipality and the lighthouse’s owners, Transnet National Ports Authority, could be persuaded…

We were lost in such idle thoughts when Graham MacKenzie walked by with two Scottish terriers, Blossom and Boss.

“This is a welcome return,” he said of being able to resume his morning walks.

MacKenzie, who lives in nearby Lagoon Drive, told Umhlanga Tourism that he was back at work, but his business as a commercial property developer was difficult for the moment.

To the south, beyond the lighthouse are fine views of Durban in the distance. But we elected to head north, reaching the whale-bone pier, a little farther on.

After the lighthouse, the pier was probably Umhlanga’s best-known man made feature.

It has won awards and regularly makes it onto must-see lists, including a compilation of the world’s prettiest jetties by CNN .

From a distance its superstructure indeed resembled the ribs of a whale, which gives it its popular name.

Up close, it reveals some neat touches too, including mosaics.

Most importantly, its wide viewing platform puts you out above the Indian Ocean.

At its very end are gratings that you can stand over and watch as the water rushes beneath your feet.

Or you can just stare at the horizon and wait for your ship to come in, as we did.

And if it does, you might want to consider putting down a deposit on one of the seaside flats behind you.

What would it be like to live in one, perhaps towering above it all in the penthouse suites at The Pearls?

Swell, without a doubt, but would it count for a jot if you didn’t have someone to share it with?

It was about then that we spied Christa Bester nearby on the pier taking snapshots with her cellphone and we struck up a conversation.

She was enjoying a morning walk with her husband, Johan Bester.

Christa is the secretary at the NG Kerk Umhlanga, helping to look after the region’s scattered Afrikaans community.

Johan is a financial adviser and spends two-month stretches in Tanzania, returning home for two-week breaks.

Fortunately for the Besters he had been in Umhlanga when the lockdown came into force and the couple spent it together.

Christa has lived in Umhlanga for the past 22 years. She is originally from Gauteng.

A little later we met another couple – Marius Botha and Stephanie Kuyler, also from Gauteng.

They were clearly enjoying the view and each other’s company, but were wearing what looked like a work uniform.

We asked them directly: Was this some kind of office romance or were they married.

“Almost engaged,” said a cheerful Botha. And no, they weren’t worried about colleagues seeing pictures of them canoodling on the pier. Botha was the boss.

His company, MR Logistics collected agricultural samples, an essential service. They had been busy in KwaZulu-Natal and were overnighting at La Loggia B&B, in Umhlanga.

It was pleasant standing on the pier, watching the world go by, as the bright winter sunlight played on the water, but it was time to move.

Shortly after we had passed Main Beach we met Bob Warren resting his sore 75-year-old body, on a low wall.

Warren, of Chartwell Heights, a block of flats in Umhlanga Village, was recovering from a back op and was clearly in some discomfort. There was also the stainless steel in his knees, he told us, repairs to old injury.

“I used to push my grandson here every day,” he said, “Slowly, slowly… we are getting there,” said Warren, adding that it was,  “Good to be out here… enjoying it.”

Some friends stopped to ask him if he was OK. Should they fetch a car to ferry him home?

No, Warren said. He felt he could make it and after a rest set off, hobbling up a slight incline as spandex-suited fit young things bounced by, back in gear after their lockdown hibernation.

A little further on, near uMhlanga Sands, two middle-aged women were taking selfies on a lower stretch of the promenade, immediately above the beach. They were fascinated by how the wind and tides had flattened out the sand in their absence.

It was a good place to pause and take in the details.

Twenty-two ships were riding at anchor.

These are the Durban roads, a designated area where vessels either await cargoes or for a berth to become available at the harbour.

Without field glasses it was hard to say for certain, but what looked like a naval offshore patrol vessel (formerly known as strike craft) was doing manoeuvres about 2 kilometres offshore.

Gone but not forgotten

Near Bronze Beach an athletic young man jogged up to a low bench and did a series of bunny-hops onto the concrete armrest before trotting off.

Each of the benches has little plaques, memorials to people who had once enjoyed this lovely piece of coast.

Another plaque remembered Clinton Clark, who died at the age of 26, also in 2015.

“Our beloved son and brother… Treasured forever in our hearts.”

There were references to a verse from the New Testament and to a famous Psalm: “Yea, though I walk through the valley of the shadow of death, I will fear no evil…”

We walked on, joining Debby Lee and Bella, a “rescue dog… 90 percent Maltese”.

“As you can see from the dogs, they are absolutely delighted,” said Lee.

If the people of Umhlanga were happy to be out under the sun, in the fresh air, then their pooches were positively cock-a-hoop.

They strained at the leash and gave each other a thorough sniffing over at every opportunity.

Our walk drew to a close towards the northern end of the promenade.

Before we said our goodbyes, Lee, 63, told how the past five weeks had been hard on Bella.

There was only a small yard to play in and no explaining to her pet why they must stay home.

The internet had supplied some new doggie tricks and this had given Bella something to do, but it was a poor substitute for get getting out.

Ahead of us the sea shimmered. Dense milkwood fringed the sand. A little further on lay the lagoon.