July 20, 2020 | Umhlanga Tourism | Comments Off on Something dishy:
Village restaurant serves the stars 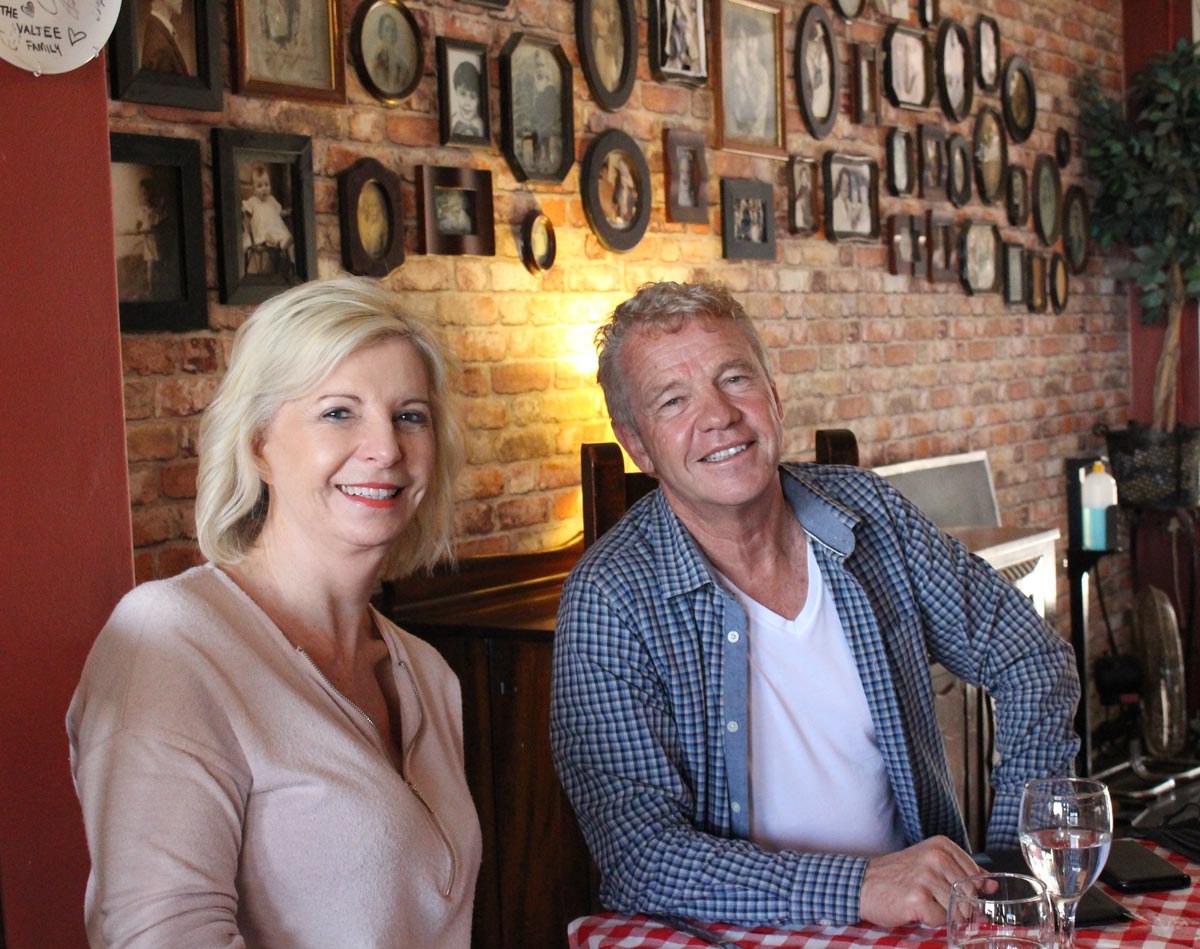 My mate, my china plate: Cockney rhyming slang, coined by barrow boys or East End gangsters. It was a kind of a code, say the experts. It was a way for those in the know to speak their mind while hiding their meaning from outsiders. But there’s no call for secrets or keeping people in the dark at Angelo’s Trattoria.

For those unfamiliar with the laidback eatery, tucked away in a corner at Granada Square shopping centre, on Chartwell Drive, let’s explain.

There are no formal rules, but if you are sufficiently famous or in some way worthy, expect to be approached while you‘re enjoying, perhaps, your peri-peri chicken (a house favourite).

Out will come a plain plate and a marker pen. And once you’ve signed it, adding a message if one comes to mind, up it goes for all the world to see.

It’s a smashing little tradition that Angelo’s has been keeping up for about two decades. And today plates crowd many of its walls, above tables and round corners.

Well, Umhlanga Rocks has long been a favourite base for sportsmen in Durban for matches or training camps. And after the action, the 90-seater restaurant makes for a friendly spot to unwind and get something Mediterranean to eat.

Cricket and rugby stars and their better-known coaches feature strongly.

There’s also a decent serving of athletes from other fields, as well as showbiz personalities, comedians, politicians, a famous pastor and other public figures.

And because Angelo’s has been going for so long (it was established in 1993) it’s built up up a strong following among the locals. Quite a few of them have have cracked the plate treatment too.

Heck, it’s no secret that lockdown has brought tough times to the restaurant trade. And head chef and general manager Nicole Clarence, said, perhaps only half in jest, that if you commit to eating at Angelo’s every day for the next month you’ll get a plate too.

Who’s the most famous name on the wall, Umhlanga Rocks Tourism asked?

A tough call, but Wessel Johannes “Hansie” Cronje has to be among the front-runners. (Or should that be, backroom fixers?)

Hansie, as any cricket lover will tell you, was South Africa’s most successful captain until his fall from grace in a match-fixing scandal.

His plate, signed less than six months before his death, is above the booth seating. Surrounding it are a bunch of other big hitters, including: Kevin Pietersen (the controversial South African born England Captain); Ali Bacher (former South African captain and for many years the game’s top administrator in the country); and Andrew Hudson (the doughty Proteas batsman and later convenor of selectors for SA Cricket).

Also in the same patch of plates is Jordy Smith, the most successful surfer to have come out of Durban in his generation. He signed his plate on 7 June 2012. As luck would have it, that was the day before he exited the Mr Price Pro Ballito, having reached the quarter-finals.

Back to cricket, but on another wall, is Barry Richards, considered by the cognoscenti to be the most gifted batsman to have come out of this country. South Africa’s exclusion from world sport during apartheid meant he played only four Tests.

If anything, rugby is even better represented in the restaurant than cricket.

There’s a handful of Antipodean Super rugby autographs on Hansie’s wall. But we won’t trifle with them here, moving directly to the main course.

Siya Kolisi, captain of the 2019 World Cup winning Springbok squad, is among a bright firmament of stars.

These include Springboks Gary Teichmann, who captained both the national team and Natal/Sharks; fullback Percy Montgomery; front-rowers Bismarck and Jannie du Plessis; lock Mark Andrews; and Cabous van der Westhuizen, the Sharks fans’ favourite and Bok winger, who is now in the restaurant business, in Mauritius.

Near the kitchen you will find Andre “The Rolls-Royce” Joubert, as he was widely known.

It’s hot in the kitchen, they say, but perhaps nowhere near the pressure cooker intensity that comes with coaching a Springbok side.

Oh then, to have sat with Jake White on the day he supped at Angelo’s. It would have been a chance, perhaps over a glass of something from the Cape, to quiz the coach on all those legendary players and personalities, plus the administrators who sacked him – after he had led the Boks to World Cup glory in 2007.

Hilton is characteristically droll: “Great food. Kak time,” he wrote on his plate.

Which plate was her favourite, we asked Clarence?

“I like John van der Ruit’s,” she said, taking us to a wall near the lav where it hangs, signed by the actor and Spud creator.

Who could argue with that?

Once you’ve had your fill of the plates, there’s a fine collection of framed family portraits near the restaurant entrance.

There are four generations of the Biassoni family, founders of Angelo’s, as well as their in-laws, the De Klerk’s.

It’s fun to look at the old black-and-white images, especially the fashions and hair-dos from different eras.

Umhlanga Tourism was particularly taken with the picture of Cleto and Ligia Ramos. The couple were sporting sideburns, thick-framed 1970s era spectacles and a beehive in their portrait.

The Ramos’s are Charmaine Amaral’s parents.

Charmaine and Danny Amaral bought the restaurant from the Biassoni family in 2018 and have kept up the portrait tradition, adding some of their own clans to the collection.

“It’s a big centrepiece of the restaurant; it always has been,” said Clarence, who has worked for both families.

Clarence said many of their guests were regulars. Some lived in the Village others were upcountry holidaymakers, who dine at Angelo’s whenever they’re at the coast.

The place, she said, had a strong following among Johannesburg’s Jewish community and Clarence reckons they get bookings in October for the Christmas holiday season.

Now read… By George, it’s the World Cup! Where to watch it