August 31, 2020 | Umhlanga Tourism | Comments Off on Our peerless pier 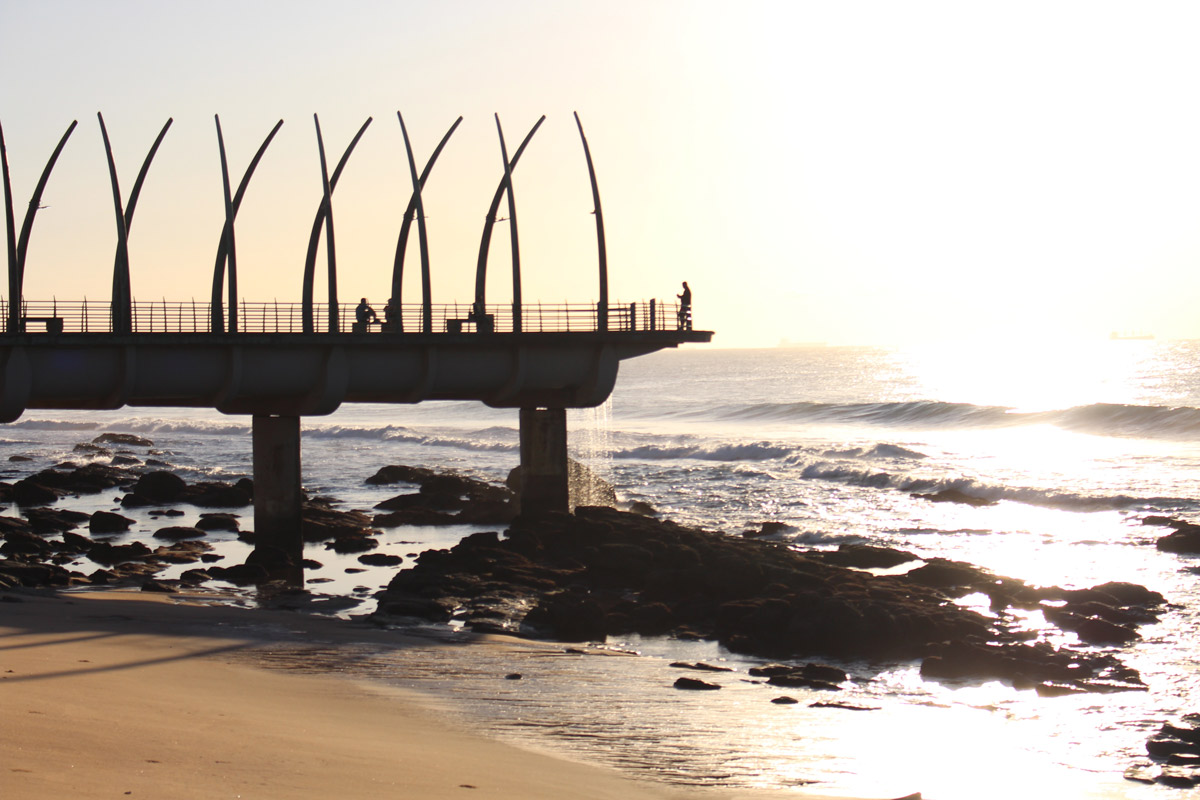 Every once in a while someone comes along and builds something that not only serves its purpose well, but looks spectacular into the bargain. For an example of just such a happy union of style and substance, consider the Umhlanga Stormwater Outfall Pier.

The eThekwini municipality commissioned the whale-bone pier (as it’s more popularly and romantically known) to deal with a very down-to-earth problem. More of that in a moment.

Logie Naidoo, the then deputy mayor whose colourful wardrobe often out-dazzled the civic events he attended, officially opened the pier in December 2007.

Today, the whale-bone pier stands to the credit of the professionals who brought the project to life.

Second only to the nearby lighthouse – an interesting piece of engineering too – it’s Umhlanga most recognisable man-made asset.

And with the passing of time, the criticism the project attracted from some quarters before it began, is all but forgotten.

Considerable attention to detail went into the pier’s design and manufacture.

This included temporary stuff, such as the formwork and falsework that let civil engineering joint venture Esor/Icon cast the smooth-surfaced concrete in situ. This part of the job was a feat in its own right, tested by the big seas that on occasion crashed into the project.

The finished pier is practical, durable and dramatic, while remaining people-friendly.

These were some of the things that helped it earn engineering awards, as well as top billing in a list of the world’s most beautiful piers, compiled by the international broadcaster, CNN.

Numerous visitors’ guides list it, while locals need no encouragement to extend their promenade walks onto it.

It has become a place to make memories, including wedding photo-shoots and a car launch.

And you won’t need to stand for long on its about 80-metre-long deck before someone will haul out a cellphone and take a selfie.

The pier’s rib-like superstructure frames photographs fantastically. Or the snapper might lean back against the handrails to squeeze the lighthouse, immediately to the south, into the picture.

Andre Duvenage, of the Architects Collaborative, which handled the architectural design, told Umhlanga Tourism he wasn’t really one for memories of projects past. His eye was ever on the next one.

But he was happy to chat about the pier’s more noteworthy features and the thinking behind these. Or should we rather say, underneath, because it’s below your feet that its real utility lies.

It’s easy to forget that the steel-reinforced concrete structure was really built to get rid of stormwater. This had been collecting in unsightly, stagnant pools on the beach, above the high-water mark.

Back to the beginning

Duvenage said he and urban designer Nathan Iyer had been involved in a planning and urban design exercise for the municipality in the 2000s, looking at how to improve the Umhlalnga promenade.

They suggested one of the ways to tidy things up would be to route most of the stormwater pipes that drained onto the beach near Granny’s Pool to one point. A single pipe could then take it out to sea.

But big pipes are a hazard and far from pretty, so they recommended disguising it in a pier.

That exercise never came to fruition. But some time later, the Pearls of Umhlanga development created an opportunity for the municipality to work on drainage.

The eThekwini Engineering Unit’s Coastal Stormwater & Catchment Management Department had commissioned Leomat Construction to build a culvert from the intersection of Lagoon Drive and Tanager Road to the promenade at the lower end of McCausland Crescent.

Duvenage got the call from the department to “see what he could do with it” from there.

He came up with what from the outside looked like a streamlined trough or shallow boat hull. But it was in fact a double-box section, with two 2.8-metre x 1.6-metre voids to carry the stormwater.

This formed the structural backbone of the pier and takes the water from the culvert to a double-barrelled sea-monster of an outlet mouth, beyond the last column. Here it falls into a natural gully in the surf zone.

But if it hasn’t been raining and volumes are low, the water trickles away out of sight, down a tube cast into the final column.

A deck covers the trough and extends outwards at the sides of the pier. This creates a generous walkway, 1.7-metres wider at its end than at the shore. There is also sufficient crawl space beneath the deck to get into the voids for maintenance or to clear debris.

The whale-bone pier ends with a 7.5-metre cantilevered viewing platform.

Here, like so many before you, you can, with someone you love to hand, assume a mock Titanic pose, à la Leonardo DiCaprio and Kate Winslet in the film of the same name.

Or you can stand on the polymer-concrete gratings and look between your feet at the sea rushing below.

And if, like your correspondent, you are romantically inclined, hum a few bars from My Heart Will Go On.